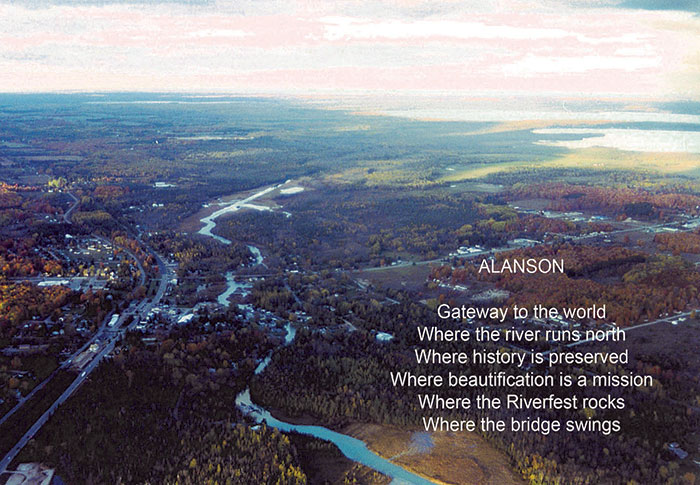 This photo was taken in 2001, and the poem was written in 2016. My friend Julie Peurassaari, challenged me to write a poem for Alanson. Since 1979, I have taken photos of the Village of Alanson. The ones seen in this Gallery were all taken within the Village limits of one square mile, with the exception of a couple of the aerials. These show the relationship of Alanson and the famous Inland Waterway.

According to the2010 census, Alanson has a population of 738 people. The junction of M-68 and U.S. 31 is in the center of town. The Crooked River also runs through the center of town, and literally connects to the waterways of the world. It is possible to go by boat from Alanson around the world. Being in a valley with wooded hills both east and west, driving into town is a most picturesque experience.

Most remarkable of all, are the people who live here. The volunteerism of such a small community, has achieved some amazing feats. These include The Alanson Hillside Gardens (National recognition), The Alanson Riverfest (winner of many State awards), The Inland Waterway Museum, The Crooked River Firefighters annual antique car show, and most recently the board walk on Crooked River. This gallery reflects and celebrates the community and the people who live here.