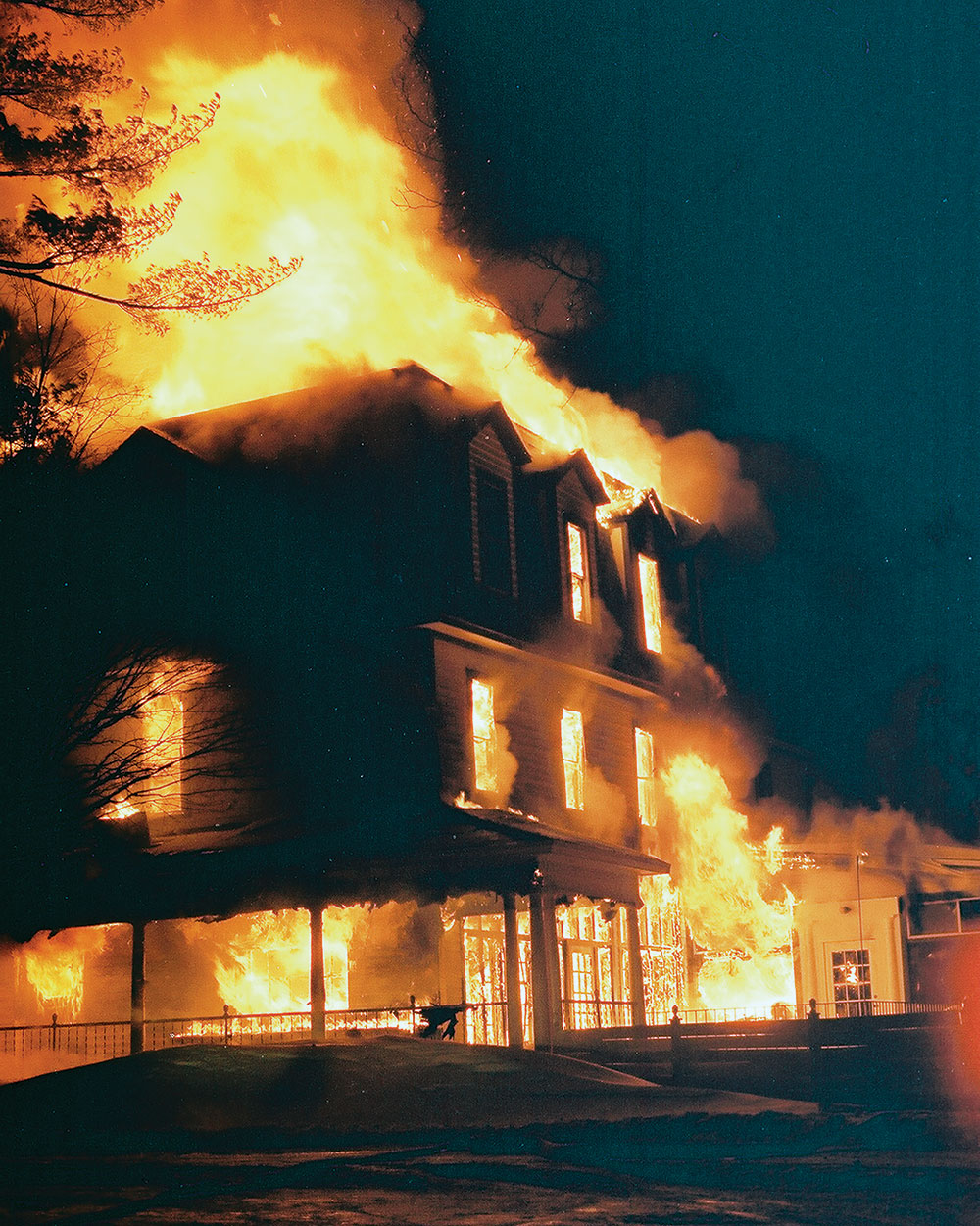 On March 7th, 1989 my wife Susan and I were coming home to Alanson from a late meeting in Petoskey. As we headed down the hill at Conway, the sky looked as though a bomb had gone off. Flames were shooting high into the night blackness. The one fire truck that was there was dealing with frozen hoses as it was well below zero. Shortly, five more fire departments arrived but to no avail. The photos seen here were taken with a Leicaflex 35mm camera. There was so much light from the fire a tripod was not needed. Because of the extreme cold I was able to move close enough to achieve the compositions shown in this gallery, these cover approximately a 12 hr. period. The Transformation was stunning.

The Inland House is remembered by many as "This Old House". From 1960 to 1978 it was owned by colorful Inn Keeper, Johnny Johnson. It was during these years that the locally famous Epsilon Jass (spelled with an s) Band played to a packed house every Tuesday night with their traditional renditions of New Orleans classics. Live recordings of these years were produced by band member Gig Steward, and can be purchased from Bud Bechtold, 231-883-3909, or [email protected] Some of the original players from this great band can still be heard on special occasions.

An excellent history of this historic building was written by Mark Hill of the "Inland Waterway Museum", and can be viewed at www.iwrhs.com . Below is the Petoskey News Review story written at the time, by John Charles Robbins.

CONWAY- The 116 year-old Inland House, a famous resort and one of the jewels of the Inland Waterway, was ravaged by fire late Tuesday. The southern end of the distinctive landmark was destroyed by the blaze, while the hotel area- now condominiums - built on in 1964 was saved. Firefighters battled the fire and the frigid temperatures throughout the night and were still working the scene at dawn today. One observer on the scene said it was 9 degrees below zero at the Lakes edge during the height of the blaze. While firefighters from six departments worked hard to contain the inferno, others kept a watchful eye on nearby homes and buildings. At the height of the blaze, a huge shroud of smoke carried sparks, ashes and debris which fell over the homes that make up the small community of Conway. It was about midnight when the bulk of the structure roared with flames and three stories of history came crashing to the ground. Firefighters remained at the scene at noon today, dousing the smoldering rubble and calling in a giant crane to push burned debris away from the remaining condominiums to the north. The cause of the fire is still under investigation. Battling the fire were the Harbor Springs Fire Department, Resort-Bear Creek Fire Department, Petoskey Fire Department, Littlefield-Alanson Fire Department, Springvale Township Fire Department and Pellston Village Fire Department. The Emmet County Sheriff's Department assisted at the scene. "They called out all the troops said Doug Carver, chief of the Resort-Bear Creek Department. The fire resulted in an intentional power outage in the Conway, Oden and Alanson area, Carver said. A thick band of high-tension electrical lines stretch along the site between the building and U.S. 31 North. Consumers Power Co. crews were asked to kill the power through the lines to protect firefighters working close to the building, Carver said. Power was restored shortly after12:30 a.m.

Tanker trucks were filled at Graham Road and taken to the site, and firefighters and others worked to "tap-in" to the frigid waters of Crooked Lake - after breaking through about two-feet of ice. A front-end loader was used at the former Little Traverse Township park boat launch ramp, just north of the complex, to break through ice so a hose and pump system could be set up. The business was closed Monday and Tuesday, and no one was in the building at the time of the fire, officials said. The fire was first spotted by a motorist, who asked a woman in the neighborhood to call the fire department. The Emmet County central dispatch notified Harbor Springs Fire Department of the "working fire" at about 10:22p.m. The fire quickly raced through the old structure. The top two floors were vacant. A huge metal tower and TV antenna, erected in the years before cable TV, wilted in the intense heat and toppled over the structure. Emmet County records list the owner of The Inland House as Christian K. O'Conner of Detroit. O'Connor, along with William Rupp, has an interest in the 18 hotel-condo units, according to county records. O'Connor couldn't be reached for comment today. The fire apparently started in the main building, in the dinner and dancing lounge area, according to manager and Chef Victor E. Beck. Beck said the hotel complex has 16 full- and part-time employees. Beck said he expects the hotel condo units will be back in use soon, and an office may be set up in a house owned by O'Connor located across the highway. Today, all that remained of the original Inland House was the brick chimney. The Inland House had a rich history as a resort and as an entertainment showplace for big name musicians. The original Inland House register shows Grover Cleveland once stayed at the hotel. Renowned author Harriet Simpson Arnow worked at The Inland House as a waitress in 1932-35. She wrote such works as "Mountain Path", "Hunter's Horn," and "The Dollmaker." Area musician Charlotte Ross Lee said The Inland House brought in big names entertainers and big bands, including Woody Herman, Lionel Hampton and Clyde McCoy. She said Frank Sinatra Jr. performed there. Her husband, the late Carroll Lee, earned a national reputation as a musician and he played at the hotel, too, along with trumpet player Bobby Hackett. "The Inland House was the home of the Epsilon Jass Band for many years, she said, "It was a Mecca for jazz musicians and jazz aficionados," Lee said.