A 43 year journey in Poetography
By
Doug Houseworth

Inspiration is unpredictable. In the winter of 1977, while driving home from work on Riggsville Road, just east of I-75, I came upon a magic moment. Conditions were such that dozens of tiny whirl winds (snow devils) were dancing across the sharp edged snow drifts. The snow was light and fluffy, and filled with ice crystals. The light refraction was dazzling and diamond like. As these little "whirl winds" flitted over the farm fields and roads, against a deep blue sky, I was so struck with the beauty, that I couldn't quit thinking about it. Snow Dust was written the next day. It took another two years for the right photograph. This one was taken on M-119 north of Harbor Springs, under similar conditions. 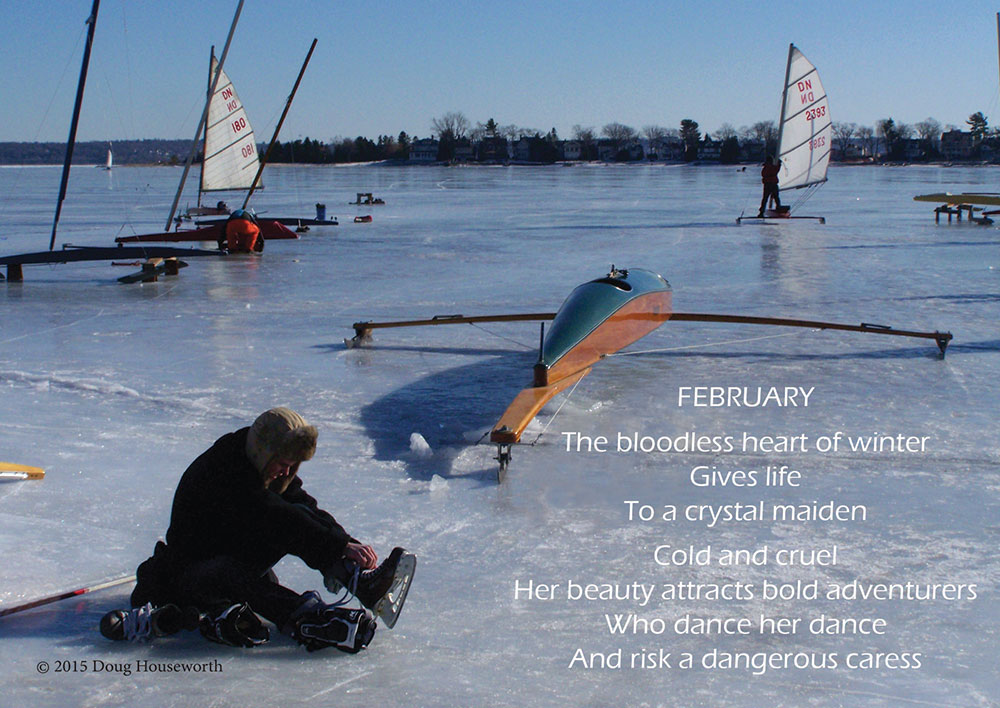 Sometimes, a poem is either masculine or feminine; this one is feminine. It came easily in 2007, while taking a walk in sub-zero temperatures. The sun was out brightly, but a bitter cold wind drove away any warmth. The first line, "The bloodless heart of winter" popped into my head, and the rest soon followed. However, the poem presented a rather challenging word picture. A few years later, in Harbor Springs I saw what I was looking for. Conditions created a scene on Little Traverse Bay where "bold adventurers" did indeed "risk a dangerous caress". An arctic blast had flash frozen the bay. The ice was crystal clear, and where deep enough, ice boaters and skaters said it was like being suspended over a black abyss. 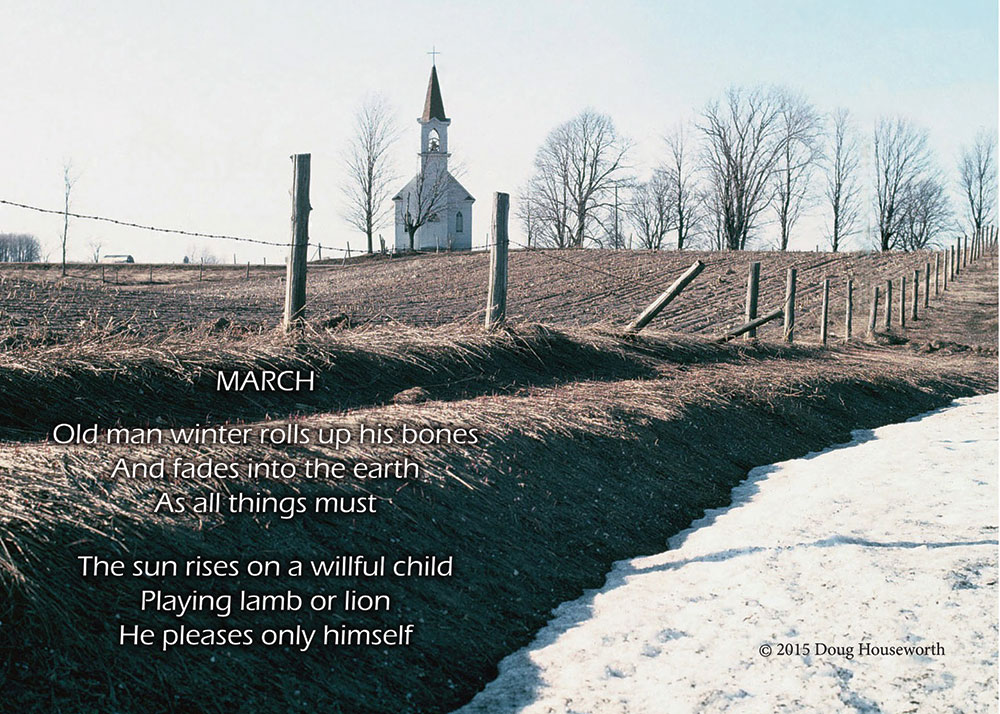 The first verse, establishes this month as masculine. The second verse is also masculine, but reflects the presence of the spring equinox. The thermal currents this time of year bring a wide contrast in changing weather patterns, hence, "The lamb or lion" effect.

In writing "The Month Poems", my goal of having both a photograph and a poem for each month, was a daunting task. Most often, a poem would come first, and then finding the right image could take years. Sometimes, a photograph would inspire a poem, as was the case for March. This photo was taken in 1979, just east of I-75, on Riggsville Rd., but at the time, did not inspire a poem. Several versions of the poem were written over the years, but all were discarded. In 2014, a revisit to some older photography produced this iconic image. It was then that poem flowed. 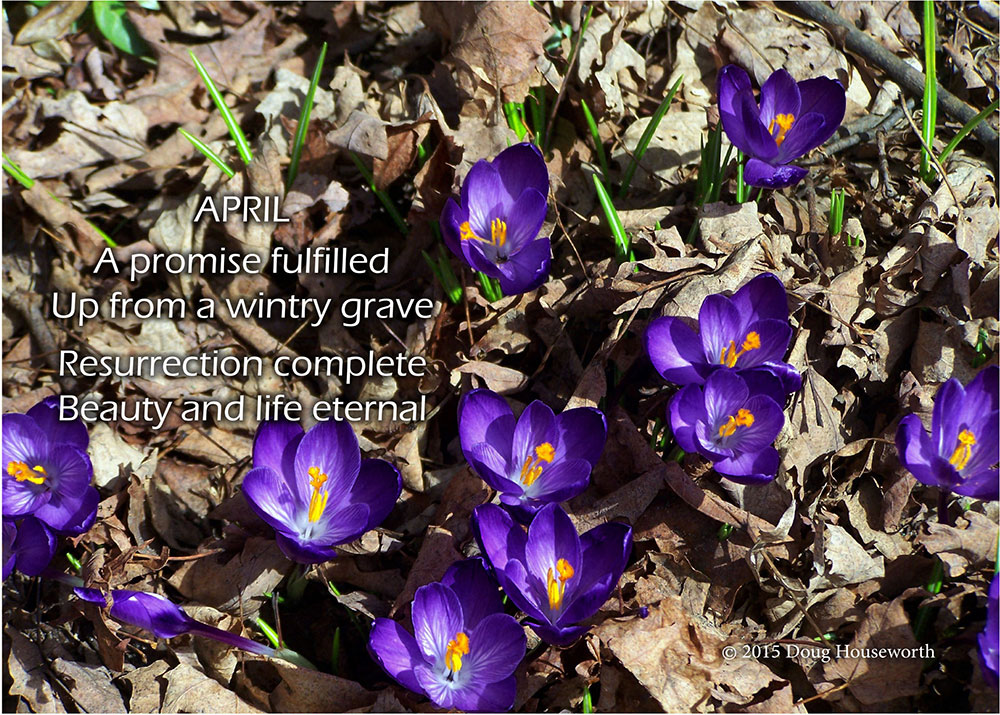 The vivid, bright colors rising above last fall's dead leaves, was the inspiration for this poem. Again, it was a photo that inspired the poem. My focus on the organic experience of a year in Michigan was getting derailed. Nothing was happening. I was looking for panoramic landscapes, not seeing what was at my feet, just outside the front door. When taking this photo, no words came to mind. After seeing it on a screen, the words came easily. April brings beauty, resurrection, and the promise of life eternal. 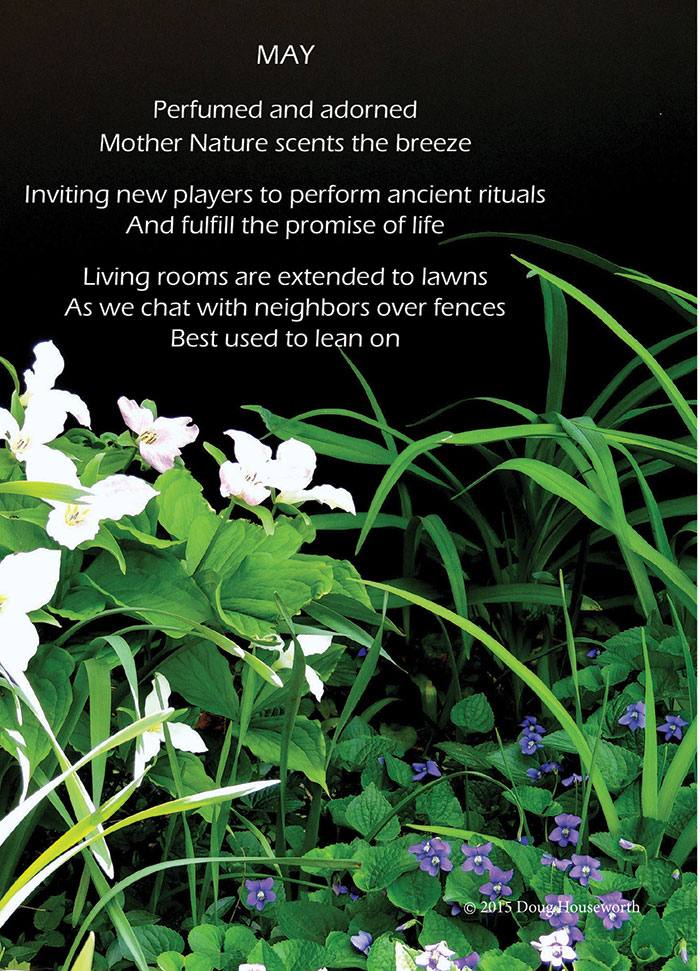 May is clearly one of the feminine months. With the first verse, it's as though "Mother Nature" is hosting a grand affair. In the second verse, she stages an annual rite of passage. Earth, air and water are teeming with life. Choirs of winged creatures sing to the guests, and all are intoxicated from sweet scents in the air. The third verse brings images of humans reaching out to connect and linger in the celebration of spring.

Like April, May only came toward the end of my 43 year quest to capture a year in Michigan. Also like April, her image was hidden in plain sight, just outside our front door.

THE MAKING of JUNE 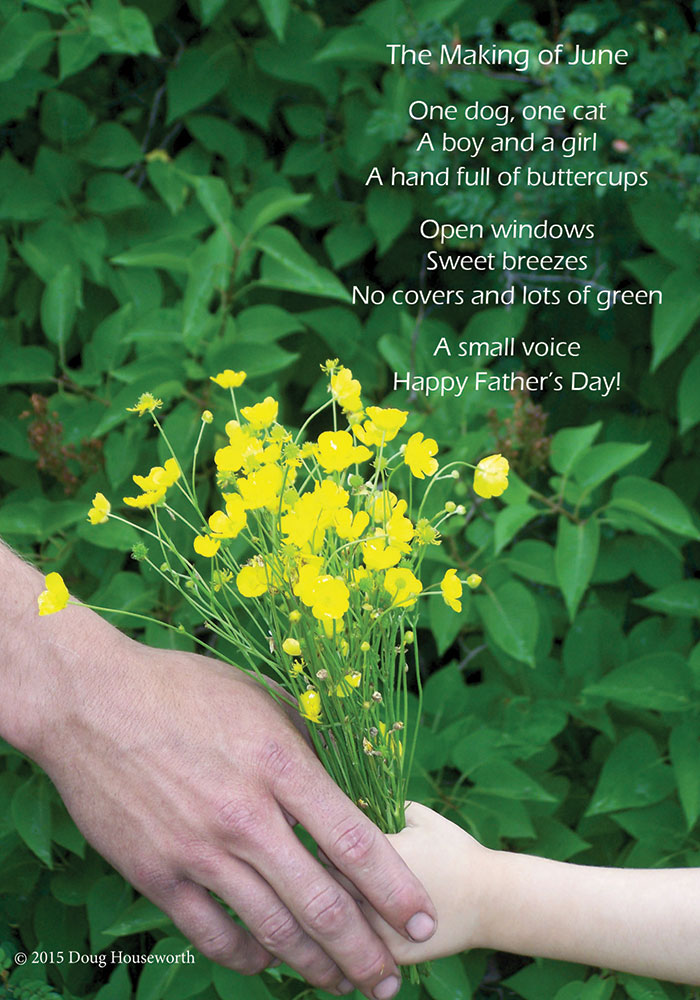 Father's Day makes June one of the masculine months. The poem for this one came easily. It describes what Father's Day was like for me when the youngest of my children were small. It was 1984 and they were ages 3 & 5. We had gone for a walk in our woods with dog and cat in tow. My daughter had been picking buttercups, and handed me her little bouquet. With such a sweet voice, she said, "Happy Father's Day. As I started to write about this, I thought of other impressions of June. Verse three describes the experience of June in Michigan. The title, "The Making of June" became a personal recipe.

Although the poem came easily, it was rich in imagery, and too much to capture in a single photo. It wasn't until 2010 that an opportunity came for a photo. It was June, and I had been picking buttercups for my Real Estate office. A client came in with a little girl, and I asked them to pose for a photo. 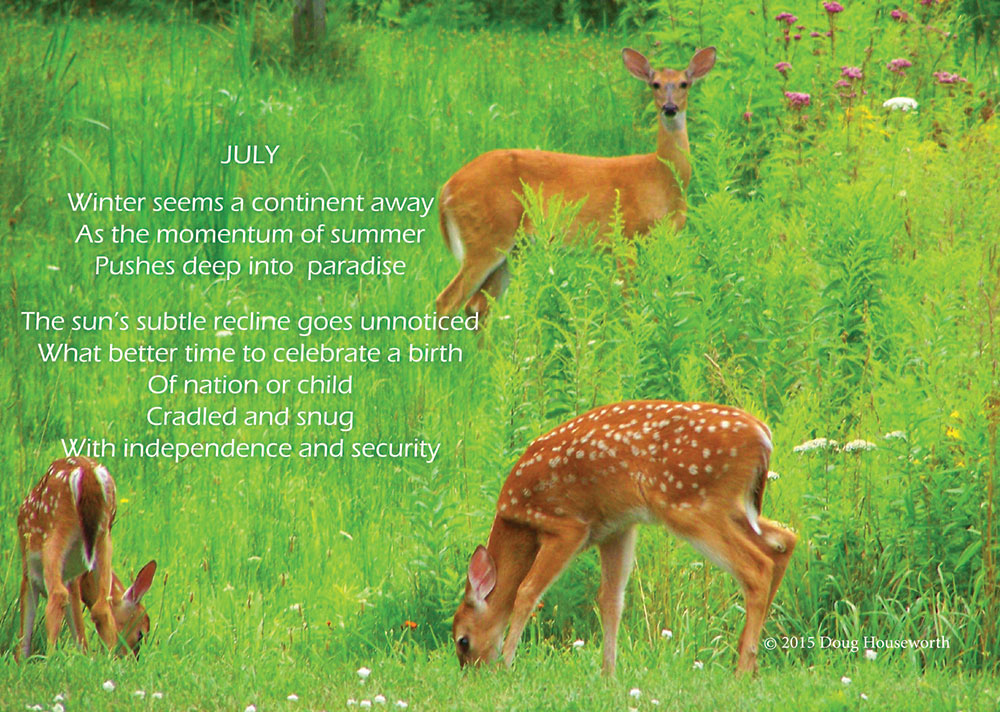 The apex of summer produces a tropical environment in the land of fresh water seas. It is a paradise unlike any other. A brief window of security nurtures new life. July holds special meaning, as three of my four children were born in this month. That, along with the 4th of July, and the birth of this nation, there is much to celebrate. As George Gershwin wrote in his famous song, "Summertime and the livin is easy."

The words to this poem came slowly and not all at once. It is one of those months distinctly feminine, where nature nurtures and sustains us. The right photo also came slowly. In the summer of 2010, I looked out my office window and in the back yard, near the tree line, was a doe and two fawns. They had everything they needed. 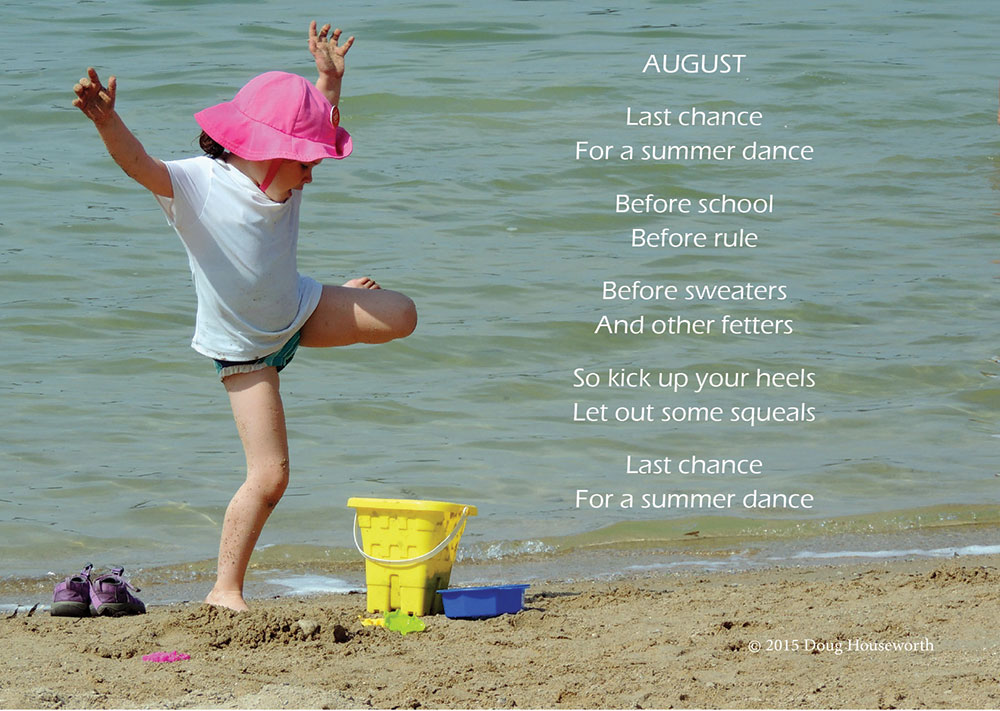 August was difficult to express. Finding an image that was unique to August seemed impossible. It wasn't until 2015, on a family vacation on Elkhart Lake in Wisconsin, that inspiration came. While taking photos of my 5 year old granddaughter, I saw an image that would work. Watching her dance joyfully on the beach, the first line came to me, "Last chance for a summer dance." It wasn't until we were back in Michigan and she was off to the first day of school, that the rest of the poem came. The photo and the poem together, are uniquely August. 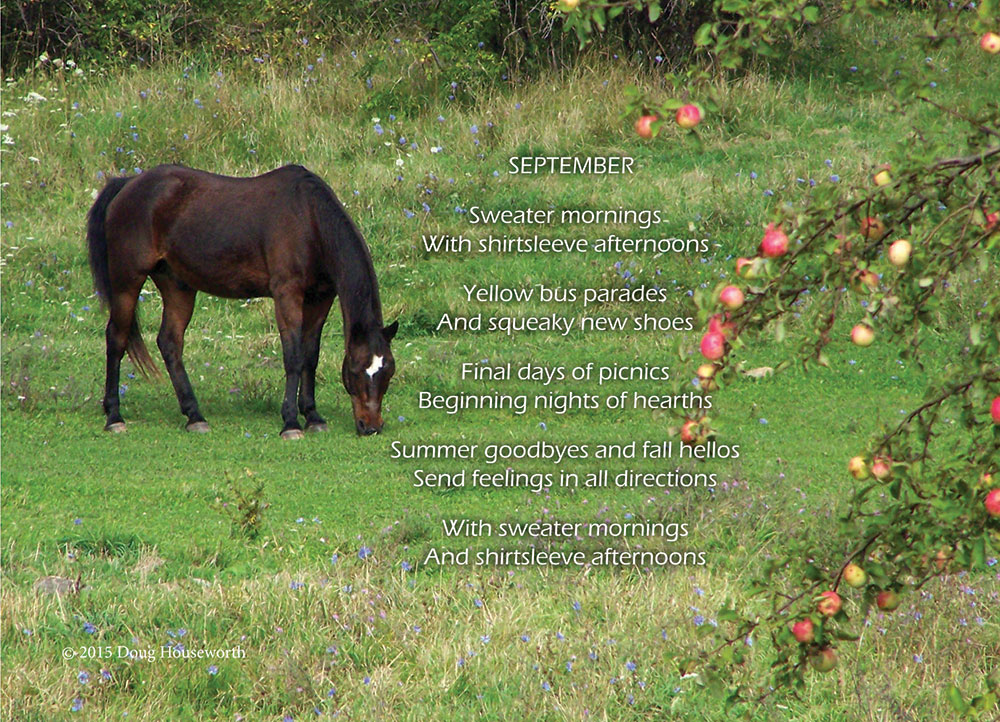 This month brings sweet memories of being "newlyweds". It was 1978. As we left home for work, it was cold in the morning but sunny. By afternoon, the sweaters came off, and the sleeves rolled up. School had just started and the yellow buses were everywhere. I thought of the changes September brings, not just in the weather but in how we live. As with most of "The Month Poems", the words were inspired and came easily.

Because the poem is so rich in imagery, finding a photo to fit it proved impossible. In 2011, I was driving on M-68, east of Onaway. There was a herd of horses grazing in an old apple orchard, and the trees were ripe with fruit. Perfect! September is a harvest month for apples, and the apple is symbolic of education. There is nothing in the photo that directly reflects the poem, but both reflect September. A special thanks to my wife Susan for showing me the connection. 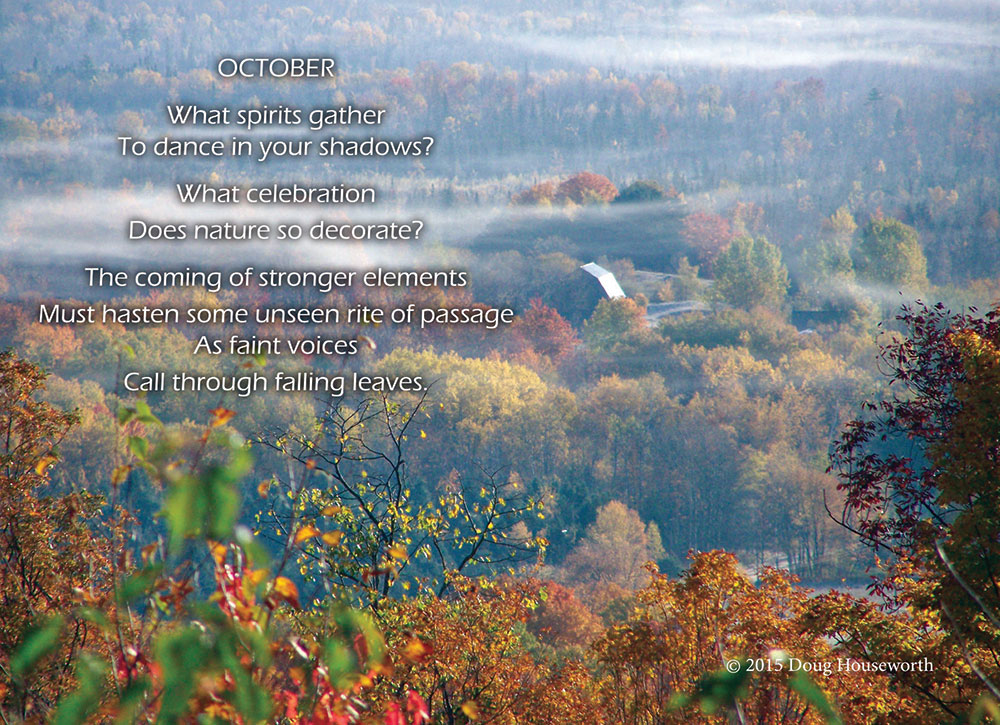 October was the first month written in the series of "Month Poems". The image seen that day in 1972 was never able to be captured. In 1984, my wife Susan and our two small children were picking apples in an abandoned orchard, up in the hills west of Alanson. As always, I took photos. One picture was particularly striking. The fall colors had peaked, but in the center of the frame was a dead apple tree with no leaves. I had it developed and gave a copy to my neighbor. Later, on a visit, I asked him how he liked it. He said, "I like it, but so far, I've counted 17." "What are you talking about", I asked. "Faces", he said. He then began to show me what he was talking about. There is a phenomenon called Pareidolia where some people tend to see faces in objects or pictures. The famous "ink blot" or Rorschach test was developed based on this tendency. After seeing what my neighbor was talking about, I wrote the poem on this card. But then, I couldn't fit the poem with the photo. In 2012, I was again up in the hills, this time west of Brutus early in the morning. A heavy mist was starting to dissipate with the rising sun. In the valley below it started to drift in wide streaks just above the trees in full color. At last, I had the right image for the poem. 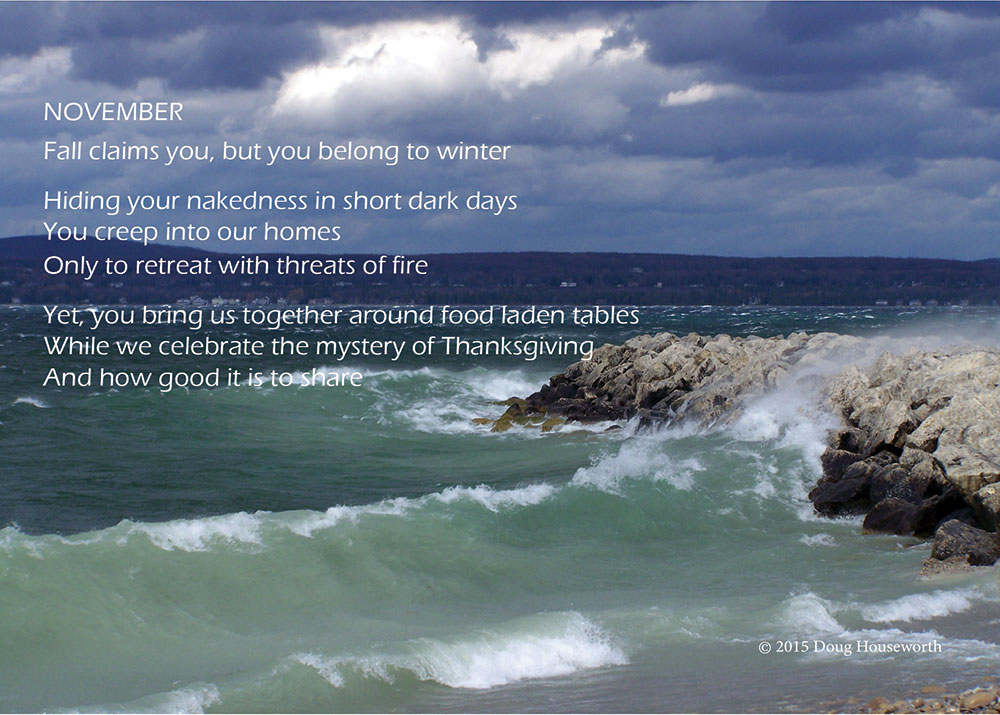 There is a certain bleakness about November, when everything is exposed. The landscape is grey and dark clouds move fast across the sky. If there is a personality to this month, I see a fugitive in desperation, needing to survive. The words, "Hiding your nakedness in short dark days", came to me while in the hospital, waiting for surgery. It was 1977. I was alone and feared the surgery. The rest of the words came a little later at Thanksgiving. Another side of November is revealed when friends and family gather in warmth to share food, drink and stories. It is a time to hunker down and brace for what is coming.

A Norman Rockwell scene of a farm house at dusk, windows aglow with the last rays of light on the horizon was what I saw in my "mind's eye", for this poem. I never got the shot. Something else was needed. In the Great Lake's Region, November is well respected. There are many sunken ships as a result of her fury. The raw power and beauty of the elements is expressed in this photo taken on Little Traverse Bay in 2012. The poem and photo express different aspects of the same month. 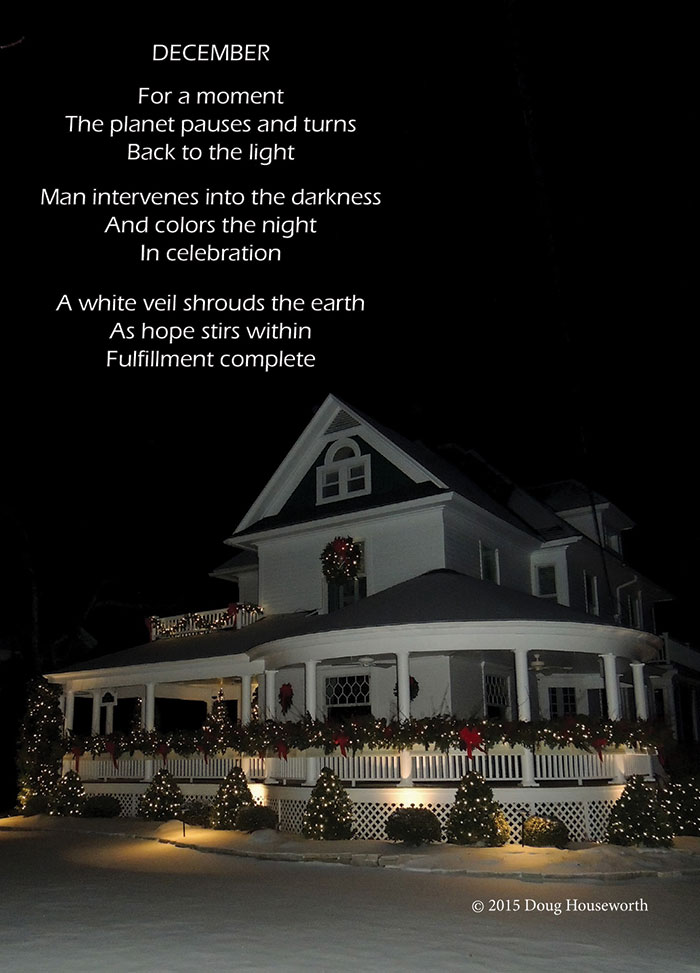 The winter solstice is a singular event in the year. "For a moment, the planet pauses and turns back to the light." The grey of November goes to black. The need to brighten and color the long night is universal and ancient. The poem and photo for this month proved to be the most elusive of all. December was the last of my efforts to complete a 43 year quest to document a year in Michigan with poetry and photography. There were many attempts over the years, but nothing ever seemed to work. It wasn't until the "Pure Michigan Travel Blog" wanted to publish all twelve months in celebration of Michigan's 178th birthday that it all came together. I was trying to make it about Christmas, but in reality, it's about the shortest day of the year. Once the poem came, I still needed a photo. Just in time, there it was on Main Street Harbor Springs.