When asked by Pure Michigan what compelled me to document a year in Michigan with poetry and photography, I could only reply that inspiration is the most fitting word. To be so captured by an image or experience, that you feel moved to express it in words, is what happened with the first three poems, over a period of five years. After that, the idea of combining both media became a challenge and a goal. I had no idea it would take over 43 years. A visit from one's muse cannot be scheduled. 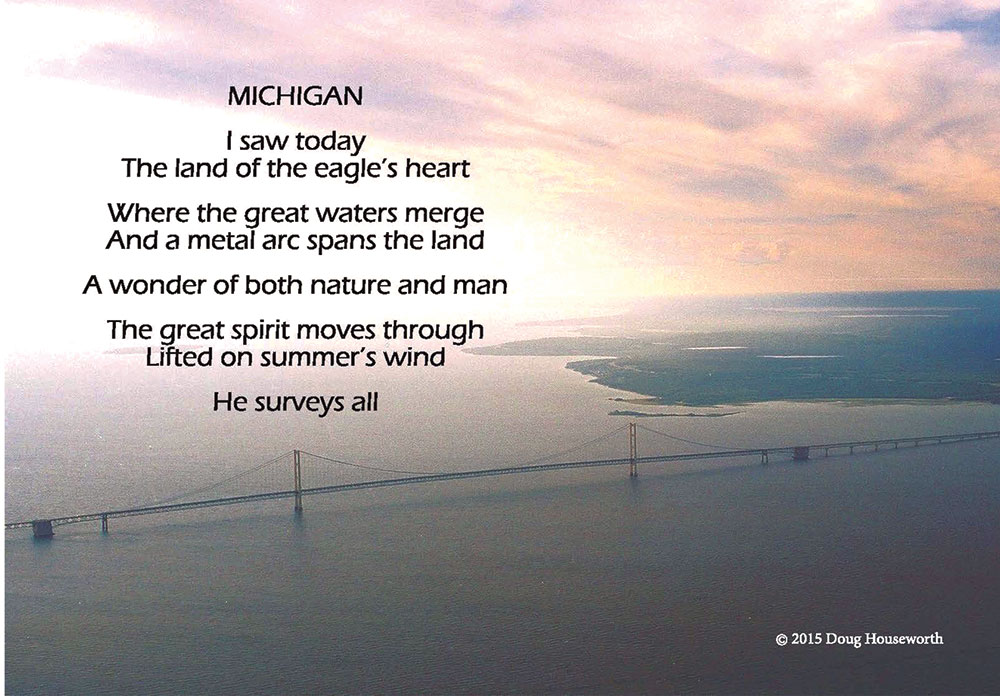 At first, it was enough to write the poems, but then matching up the poems with images became both an obsession and a daunting task. Only recently did I know there is a name for this process. It's called Poetography. Usually the poem would come first, but sometimes a photograph would inspire a poem. October was the first poem and came in 1971. But the image I saw on that day, I was never able to be capture with photography. Twelve years later, I took a photo that inspired a new poem. In turn, the new poem inspired another photograph, but wasn't captured until 2008. October became an evolving collage. The one you see in this gallery is the final product. The back story of how each month was finally captured can be seen here.

The second poem didn't arrive until winter of 1977. Driving home from work one day, I came upon a magic moment. Conditions were such that tiny whirl winds (snow devils) were dancing across the sharp edged snow drifts. The snow was light and fluffy, and filled with ice crystals. The light refraction was dazzling and diamond like, as they flittered over the farm fields and roads, against a deep blue sky. I was so struck with the beauty, that I couldn't quit thinking about it. Snow Dust (January) was written the next day. It took another two years for a suitable photograph, and even then the photo doesn't quite match that enchanting moment and first vision.

The poem for November was also inspired in 1977. The poem came easy, but the inspiration was more of a feeling than a single image or vision that caused me to write. A suitable photograph didn't come for another 30 years. Michigan has a unique relationship with November. Ship wrecks are legend. Surrounded by fresh water seas, the power and beauty of the changing elements is an awesome sight to behold. The photograph of a raging Little Traverse Bay, with fast moving clouds, casting dark shadows, captured the feeling of the poem. And I think, is more powerful than just the poem or photo alone. Each captures a different side of November.

And so it went, each month having a story and personality of its own. It has taken decades to capture the essence of each month. In Michigan there are seasons within seasons, and nothing is static. Each month is always in transition. There is a certain tension within each month, and often within the same day, as in the first line of September, "Sweater mornings with shirtsleeve afternoons." A much different personality occupies February, "The bloodless heart of winter gives birth to a crystal maiden. Cold and cruel her beauty attracts bold adventurers who dance her dance and risk a dangerous caress."

Many of the "Month Poems" make reference to dance as in January, "Snow dust dances in swirls across sharp edged drifts, and in August, "Last chance for a summer dance." The dance really never stops, but the music and mood change. This is the richness and diversity of living in Michigan.

There is something about being surrounded by fresh water seas, and the life force that goes with it, that sets this state apart from all others. The interaction of sky and water, and how that plays on the land, is an ever changing wonder and fascination for those who live here.

Some say, "It is the land that defines the people." Certainly, Michigan offers an encounter with the elements unique in the world. It does shape our lives and how we live. Trying to capture this with both poetry and photography has been a labor of love, and could only be done as personally experienced. Now available as Prints and Note Cards