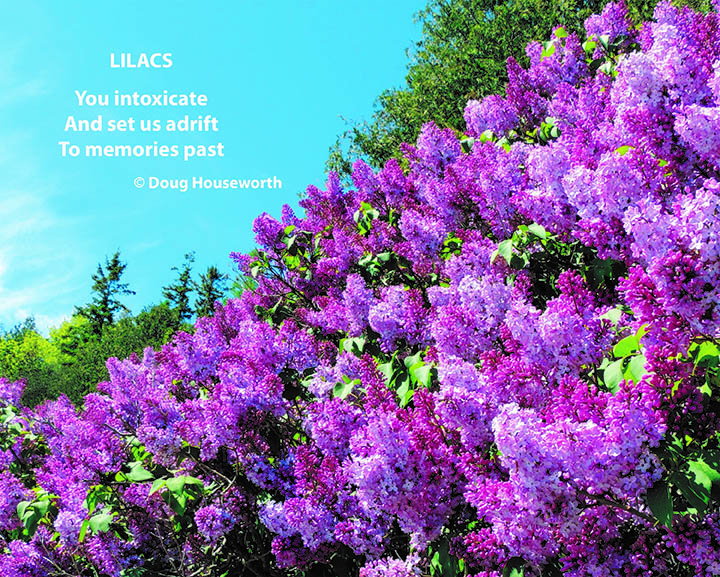 The first and only time I had ever entered a photo art show, and displayed both photography and poetry, a woman introduced herself as a member of the International Lilac Society. She wondered if I had any poems or photos of Lilacs. I had a couple of photos but no poems. She was very enthusiastic about my "Poetography", and requested that I write a poem and put it with a photo. She also said she would submit it to be possibly published on the Society web page. As a poet, my habit is to only write about things that inspire me. This was a difficult challenge. She explained the importance of lilacs. Because of their intoxicating fragrance and beauty, memories are imprinted and associated with the spring blooming of this amazing shrub.

I set about writing a poem and inserted it into what images I happened to have. She didn't like the images and said the poem still needed work. As lilac season was many months away, I told her that I would go to Mackinaw Island during their annual Lilac Festival. The poem remained a work in progress. Just before the bloom peaks, the unopened buds offer a color contrast. The timing of the photo shoot was perfect. Doing what photographers do, I selected a walking route of key iconic images, and then tried to frame the shot with lilacs. This was done in both morning and afternoon light. Images of just lilacs were also selected, with enough sky in the frame to place the poem. After this baptism in lilacs, I was inspired and finished the poem. Sometimes the photo comes first. There are several other images that include the poem. Included with this gallery is a troop of Boy Scouts I encountered while on the Island.